Andrew Redmayne for a long time in his A-League career was deemed not good enough by large sections of Australian football. A second fiddle for the absolutely majority of his career - often to some of the best keepers the league has seen.

He struggled for game time at his hometown club Central Coast Mariners as a youngster, and moved to Brisbane Roar for 2 seasons - being the back-up to Michael Theo as Ange Postecoglu's Roar went back-to-back toilet seats. He made just 5 appearances in the first 4 years of his A-League career.

That's enough to stop a majority of goalkeeping careers. A new opportunity came for Redmayne at Melbourne Heart, yet again as a #2. His debut for Heart came in a January win over Newcastle Jets in 2013, and from there on out was first choice keeper. Playing time would soon become limited however, with the rebranding of Melbourne Heart into Melbourne City coinciding with him being being dropped for Tando Velaphi.

His next move was in 2015, joining Western Sydney Wanderers to replace Ante Covic who had just retired, after an inspired few years with the Wanderers. Big shoes to fill. He played 23 matches for the Wanderers in the 2015/16 season, as the Red and Black were runners up in both the premiership and championship. His form was good enough to justify being the #1, benching veteran keeper Liam Reddy in the process.

Redmayne was the #1 for the first 11 matches of the 2016/17 season for the Wanderers, but suffered incredibly poor form, in part due to being in a fairly poor team - and clearly very low confidence. He was a goalkeeper crying out for a change, and luckily - things lined up. 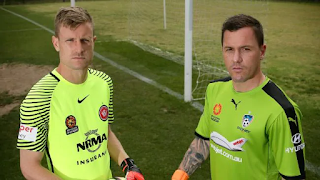 At Sydney FC, previous starting goalkeeper Vedran Janjetovic had found himself frustrated on the bench following the brilliant start to the season by new signing Danny Vukovic. Janjetovic desired a move out west to reunite with previous goalkeeping coach Zelkjo Kalac, and Redmayne had the chance to reunite with with two influential coaches from his past - Graham Arnold, and importantly - John Crawley. So, the swap was done. Janjetovic joined the Wanderers, Redmayne joined Sydney - yet again a second fiddle - or so it seemed at the time.

The swap move was a controversial one at the time, with fan backlash around the move instantly. Whilst most of this was toward Vedran Janjetovic (a former fan favourite) - Redmayne copped a lot on social media as well. Hell, I was guilty of it. I wasn't enthused with the signing at the time, but I think a lot of the bad reaction was more because of the way Vedran left. Had Redders signed from us off Wanderers in the off-season, I reckon there'd have been much less of a fuss.

Goalkeeper form fluctuates a lot, as the then #1 of Sydney - Danny Vukovic - was discovering. After a fairly forgettable spell at Victory, "Vuka" joined Sydney with a chance to reinvent himself (sound familiar?). As we all know now, Danny Vukovic's sole season at Sydney was truly superb - a record amount of clean sheets, a Socceroos call-up for the first time in 7 years, and trophies.

That Roos call-up gave Andrew Redmayne his debut chance, as Sydney travelled across the Nullarbor to play Perth Glory. Sydney had mathematically won the Premier's Plate the night before their game against Glory, so it took the pressure off the Sky Blues as a whole.

It was a routine 3-0 win in Perth, with Redmayne only needing to make two saves. For a while there, it looked like that could be the only time we'd ever see him start. That was until Danny Vukovic sealed a dream move overseas to Genk in Belgium after winning the 2016/17 double. Thus left a void between the sticks for Sydney.

Once again, fans weren't sure what to make of Redmayne as a #1 for the upcoming season. Replacing a goalkeeper in a winning team is hard enough, but especially hard when that goalkeeper had the greatest season a keeper's ever had in the A-League. When it came to the first pre-season games of 2017/18, Redmayne was given the nod. After an injury ruled out new signing Alex Cisak for a lot of pre-season, it was clear it was Redmayne's spot.

Changing goalkeepers is hard, and getting a player's confidence back is even harder. Redmayne's attitude towards the situation was commendable - a self proclaimed "head down, bum up kinda guy". Work hard on what you need to improve on, contribute to the team, stay humble. If there's ever a player to personify "never give up" it is undoubtedly Andrew Redmayne.

After a season at Sydney, it had become fairly clear there had been a considerable improvement in his game. The nervy moments became fewer, he hit some form consistency for the first time in years and was clearly much happier on and off the pitch. 17/18 was a settling period, and 2018/19 was the new dawn.

2018/19 was a truly turbulent season for the big man in goal. Good pre-season form, including a Man of the Match performance against ex-club and rivals Western Sydney in the FFA Cup, as well as a penalty save in a Round of 16 match had him in good footing ahead of the upcoming season.

From December until May, Redmayne was a machine. Long gone was the tenuous punches of crosses into the box, and more heroic claims of the ball and a clear aura of confidence about him. Comfortable and commanding in his box, he's worked hard over the last 2 seasons to make the #1 spot his own. 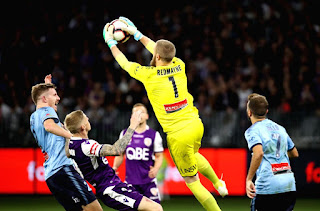 Heroes are made in big moments, and in Australia, it doesn't come bigger than a do-or-die Grand Final. Fittingly, the same club and city for which he made his Sydney FC debut for back in 2017 would now become the home for his most iconic career moment so far.

Redmayne pulled off two massive saves in normal time, in an otherwise tense and gritty match between Perth and Sydney. When it came to penalties, it was time for "Redders" to shine.

The night prior, Sydney FC hosted a meet-and-greet with travelling supporters at their team hotel. A great function in which we had pretty much free access to players. I asked him about how he felt about penalties, and he had a confident look on his face as he replied.

And that confidence carried over the shoot-out. His now notorious "Wiggles" routine on the goal-line to put off the taker was inspired and showed a lot of self-belief to continue doing. He went the wrong way for Glory's first penalty, but then saved Irishman Andy Keogh's penalty down low to his right.

Destinies and narratives combined however, with Brendan Santalab - a player hated by Sydney supporters for his abuse of Ali Abbas years back - up to take a do-or-die penalty. A proper villain to Sydney supporters over the years. If he scored, Glory still had a chance of getting even in the shoot-out.

Redmayne's goalkeeping coach John Crawley famously noted for Redmayne before penalties "Santalab: Dink, middle". The glovesman took the advice and stood his ground on the line - catching with ease Santalab's failed panenka penalty. A villain vanquished by the underdog hero on his redemption arc. Full circle from his debut for Sydney just 24 months prior in the same city. 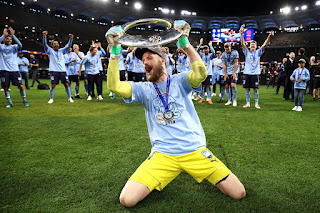 This of course set up Reza Ghoochannejhad to win the shoot-out, and the A-League championship, for Sydney FC. As Reza himself said in a post-match interview: "Redders man... f*cking unbelievable!" I think that sums not only his performances this season - but the story of the man himself. A once completely rejected goalkeeper now the star of a championship winning team, comfortable, happy, and now a hero for the ages for Sky Blues supporters. No matter what else happens, his redemption story will remain in the annals of Sydney history.

Off the pitch, Redmayne has been a class act. Embracing the challenge back in 2017 and endearing himself to supporters and being incredibly charitable with his time. He's given away jerseys to supporters, and spent considerable amounts of time after matches taking selfies, signatures, and chatting. That's what I love seeing from players.


My girl met her hero @redders_20 today and he autographed this incredible original artwork by @squires_david. We have a wonderful football community #SokkahTwitter pic.twitter.com/uxbzUukYS9
— Rory Carroll (@CarrollRory) October 3, 2019

19/20 looks to be another big season for Redders. Called up to the Socceroos squad again after making his debut in June, alongside fellow Sky Blue Rhyan Grant, and going into the A-League season as arguably the best keeper in the competition. I'm keen to see where his story leads next, the redemption arc is just one chapter in a now bright looking career.

Thank you for reading this article, it means a lot to me. I've been slowly working on this since the Grand Final in May. More content to come throughout the 2019/20 season and beyond from me on here.

Thank you to everyone who has supported me via donations on my ko-fi page. Every donation is appreciated and I hope you enjoy the content from me.