Across the board for Sydney FC, the 2018/19 season was one of definite success. With championships in the W-League and A-League, this will go down as a memorable year in record books.


Let's start off with some coverage of the championship winning Sydney FC W-League side, captained by Teresa Polias.

The opening 4-5 weeks of the season were not ideal in the slightest. Bar an opening round 3-0 thumping of rivals Wanderers, there was little consistency from the side and just weren't cohesive as a team. A mixture of players not quite being at full fitness, interruptions with international breaks, and just not enough time to prepare.

A big 5-1 win over Brisbane Roar put the side back on track for the season, and from there things just started to click. Princess Ibini's impact off the bench soon became the X-Factor of the starting XI, with the 19 year old scoring 4 goals and assisting 3 goals. Around this time also saw Amy Harrison's full recovery from her anterior cruciate ligament injury from last year, which is always great to see players come back from - especially considering how well she played last year before copping the injury.

Caitlin Foord and Savannah McCaskill's partnership really blossomed after January, allowing for a great finals run-in. Matildas forward Caitlin Foord's confidence was high by the end of the season, scoring 10 goals and putting in some of her best performances for Sydney. Foord also bagged the most assists of any Sky Blue player, with 5.

At times Sydney honestly played some of the best football I'd seen in the W-League season even if their early season form cost them too much to win them the Premier's Plate. The finals series was a different story however, and it was a joy to see centurion captain Teresa Polias finally lifting the W-League trophy as captain. Arguably the most important player in the team and most definitely the heart of the club.

Goalkeeper Aubrey Bledsoe picked up the Goalkeeper of the Season award at the Dolan Warren Awards night, and definitely a deserved win. With a decent amount of chopping and changing of her two central defenders, she did a fantastic job throughout the season and saved many points. Thankfully for Sydney, she's still got another year left at the club on loan from Washington Spirit.

Something worth noting too is how high quality all the W-League finals matches were. All three games in the finals campaign were top spectacles and produced football that the A-League can only dream of for finals football. The future remains bright for the women, with the leadership of Teresa Polias and management of Ante Juric a dream combo.

I'll be looking forward to the World Cup kicking off in just over 2 weeks time, especially with 5 Sydney players selected in the Australian squad. 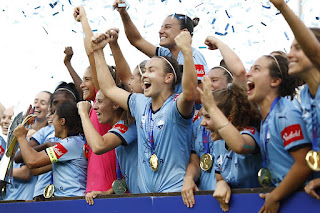 The A-League season has been a proper weird ride. Prior to the season I didn't really have many expectations other than probably finishing top four. The losses of Adrian Mierzejewski, Bobo, Jordy Buijs, Luke Wilkshire, and Matt Simon can't be understated. That's five big players who were so impressive in their times at the club. Then there's the matter of Corica's debut season.

Replacing Graham Arnold is always going to be a tough act to follow, even without needing to replace the spine of the team. But somehow, Corica did a fantastic job in the end. The signing of Adam le Fondre a particular highlight, with the Englishman scoring 23 goals across three different competitions.

Return of right-back Rhyan Grant felt as though it were a new signing, with the Energizer Bunny acting as if he never picked up an ACL injury just 12 months prior. Grant was just exciting to watch, every time he went for a bolting run down the wing you felt like something would happen. Having a player like him around is great for the team.

Andrew Redmayne more or less made himself a cult hero during the season, with the keeper saving 4 out of 5 penalties faced in the season, and saving 2 penalties in the 2019 Grand Final penalty shootout to help Sydney lift the toilet seat. Seeing how he's developed in just over 2 years has been immensely satisfying. His confidence is sky high and right now it's hard to find a keeper more reliable if you need a penalty saved. His humble attitude towards his own success says a lot about the team culture around him too, this isn't a side that takes success for granted or drops their heads. He, much like the team throughout 2018/19, kept improving.

Retiring club captain Alex Brosque proved just as influential as in previous years, with the skipper turning back the clock and putting in an outstanding final year. 11 goals in 3 competitions for a 35 year old who was not expected to play a huge role in the team at the beginning of the year is incredibly impressive. The club will not just miss his leadership, goals, skill, and consistency, but having that sort of anchor to carry us through tough times. There is no doubt in my mind Brosque will remain the Sky Blues greatest ever captain, and greatest ever player. Enjoy retirement Brosquey.

The 6-1 demolition of Melbourne Victory in the semi-finals was the sort of "wevenge" we'd all wanted after last year's heartbreak. Despite the Grand Final itself being a bit of a drab match, we'll always have 6-1. One of those performances that will live in memory, and a thwacking so good it got Muscat sacked from Victory. You love to see it.

Corica's first season as head coach should be seen as a huge success. Bimbi showed he is more than capable enough to take this team forward, and I'm very much looking forward to how he approaches next season. 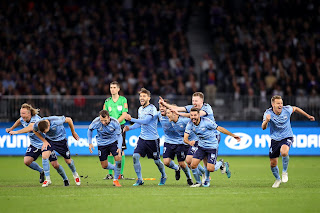 Thanks for reading this season review. I plan on writing a larger piece about the Grand Final itself once I've had a bit of time to work on a few other projects, but it's safe to say Perth was a great host city for the A-League Final. It was brilliant catching up with so many other Sydney supporters over the weekend - this club has such a great family feel to it and I can't quite capture how great it feels to be in The Cove on nights like that.

Thank you to everyone who has supported me this season by way of sharing my articles, donating on ko-fi, and by interacting with me on twitter. The off-season will be long and will suck, but we've got some happier memories to keep us going through the long winter this season.